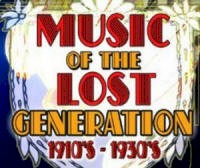 To learn to play jazz you need to know the songs, inside out, upside down and every which way ... !

Wonderful American Popular Songs from the first half of the twentieth century have become established as the indispensable framework for jazz. They have a structure and characteristics immediately identifiable as 'Our Kind Of Music', they all go 'the same old way'

Have a look at the listings below and let me know which of these great songs you're interested in learning to play and we will e-mail the lead sheets to you ... hoping for swaps in return ...

Our collection of Lead Sheets in 'Band-in-a-Box' format are part of the tradition of early jazz. You can brose our collection and search our database in an excel spreadsheet here (ignore the 'a's & 'the's)

We've reached a milestone there are now over 5,000 songs! ... we described them as 'Dixieland Standards' and songs from the 1920/30s but there are also a lots you might not expect ... but we like them!

There are still many missing gems ... and hundreds more options ... help !

Remember we are a 'swapping' group of enthusiasts ... players, listeners, historians & various hangers on who often defy description ... we don't sell anything ... and note to avoid inevitable confusion -

NB 1  Our songs are all in 'Band-in-a-Box' format and have been collected as simple lead sheets giving the chord sequence and straight melody line aimed at teaching the basic structure, they are not musical 'arrangements'.

NB 2  This growing data base is incomplete and needs your contribution! Please help with swaps!

NB 3  The songs are not directly downloadable because we want to respect copyrights of the 'songsters' and we also want to encourage 'swaps'.

But all is not lost we will happily email a few songs you may want to learn, send me a list ...

... but no guarantees so watch out for typos, errors, omissions

... and thanks for any corrections & additions ...

Lil Hardin was an important writer of early Dixieland Standards, have a look

and some Johnny Hodges

Simple lead sheets? ... but with the application of a little magic, wizards like my mate Alan can transform a simple 'Band-in-a-Box' lead sheet into a musical wow! ... have a listen to this arrangement of Maceo Pinkard's song Livin High ... 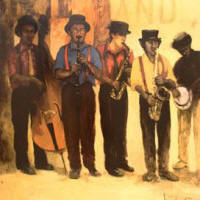 What are they playing ?

The song you are looking for is not listed?

We may be able to find it for you ... you never know ... we have lots of bits and pieces which have been collected over the years ...

printable lead sheets with key, transposition and clef change options for all the band

and much more to help with -

Get a bunch of 'Band-in-a-Box' songs which you think might be fun to play ... select the 'Juke Box' and a suitable Dixieland 'style' and go !! ... listen while you're washing and for any toon you like there will be an instantly available lead sheet to get you started ... !!

Many many books have been written about these songs and the song writers ... details of some of the best are here